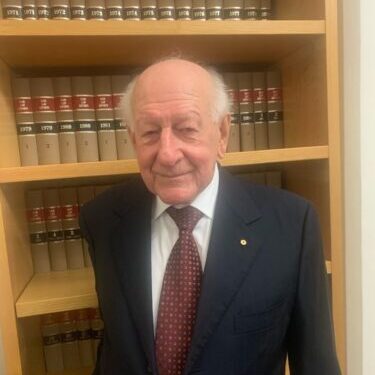 Ian Viner AO QC is an independent barrister. He was appointed silk in 1984 and appointed an Officer of the Order of Australia in 1999. Ian is a member of the WA Bar Association of which he was President 2001-2004 and President of the Australian Bar Association 2005 and 2006. Ian joined the fledgling Independent Western Australian Bar in 1964. He was the member for Stirling in the Commonwealth Parliament 1972 to 1983 and a Minister and Cabinet Minister and Leader of the House in the Government of Malcolm Fraser 1975-1983. He was a part-time member of the National Native Title Tribunal 1995 and 1996 and undertook the Harvard Law School course in Advanced Negotiation and Mediation under Professor Robert Fisher. Ian’s has been a general practice, focusing in recent years on administrative law, commercial, equity, native title and appellate areas of practice. He argued the successful High Court Appeal in Mandurah Enterprises Pty Ltd v WAPC [2010] HCA 2; (2010) 240 CLR 409, a leading case on the exercise of the State’s statutory power of land acquisition.
As President of the WABA Ian was instrumental in introducing the Bar Exam Course of specialist education for new members of the Independent Bar and obtaining membership of the WABA and other Small Bars on the Law Council of Australia.
As President of the ABA, Ian instituted the ABA’s Advocacy Training Council.